Hari Sreenivasan: Joining us now for more on the impeachment that's coming in the 2020 campaign is special correspondent Jeff Greenfield, who is in Santa Barbara. So here we are, finally. Nancy Pelosi took some time. She said that she wouldn't do this until she was ready. She says now she's ready to hand it over to the Senate. What do we know? What do we not know about what changed her mind?

Jeff Greenfield: Well, we know what changed her mind is a certain amount of pressure and the threat that the Senate might just scrap the whole idea. But it's what we don't know that I think is the dominant issue. We do not know really what the impeachment will look like. We do not know whether or not witnesses will be called, whether or not if McConnell says no witnesses, there will be four Republican senators to defect and insist that witnesses come and that documents be provided. We do not know if the Senate votes that whether the White House will invoke executive privilege on some key potential witnesses, like former National Security Adviser Bolton or Chief of Staff Mulvaney. We do not know what would happen if the senators try to override a ruling by the chief justice who presides over the center on issues like admitting witnesses. So there's a range of things we don't know about how this impeachment will play out.

Hari Sreenivasan: What is the White House, I guess and its allies, do with the possibility of any of these senators who defect from the party line? 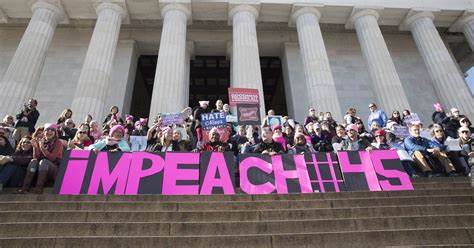 Jeff Greenfield: First thing they do is what we've already seen this week. There's enormous pressure on Republicans in the House and Senate to to stay with the president on everything. When Senator Mike Lee of Utah, very conservative, objected to the kind of briefings that they were getting after the strike in Iraq, Lou Dobbs, one of the president's champions, called the senator a 'Benedict Arnold.' So that's the first thing. Put enormous political pressure, whether you can put political pressure on senators like Susan Collins and Cory Gardner, who are up for reelection in swing states, that's an interesting question. And the second thing, as I mentioned, was they can try to invoke executive privilege and tell people like John Bolton and Mulvaney, you can't testify. And we don't know whether Bolton in particular would defy the White House. It's gonna be an interesting couple of weeks.

Hari Sreenivasan: Yeah. So here we are finally. The couple of weeks are now in January of 2020. We've got Iowa and New Hampshire just around the corner. And it seems that wherever I look, there's new polling data. Oh, this person's up by two. This person is up by six. Is this worth paying attention to?

Jeff Greenfield: You know, I've often said that polling is the crack cocaine of political journalists. I mean, you look at the headlines, you know. "Sanders surging!" And then you look and you realize the first four candidates in Iowa are separated by five points, with only 40 percent of Iowans saying they've made up their mind. And I haven't even mentioned the fact that two billionaires out there, Steyer and Bloomberg, are spending like crazy. Steyer's picked up some support in South Carolina and Nevada. Bloomberg is spending two hundred million dollars, most of it in states that don't have primaries for a month or more. So it's a completely un-analyzable situation if you're trying to figure out, where do we go from here?

Hari Sreenivasan: If there are people like Mr. Bloomberg contesting something further down the line, what does this do to how important those early states were or are?

Jeff Greenfield: It has the potential to completely undermine the enormous over-coverage of those early states. And I'm sure for some of those politicians in those states, they're worried about breaking their rice bowl, as they say in China. They're worried that if Bloomberg, and I guess Steyer, demonstrates that you can skip those early states and with an infusion of huge amounts of money change the dynamic of the whole campaign, I think in future years, those states may lose some of their clout.

Hari Sreenivasan: All right. Jeff Greenfield joining us from Santa Barbara, thanks so much.