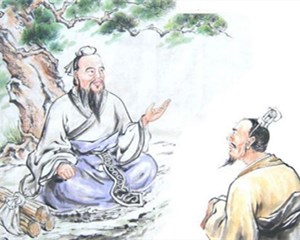 The Man Who was afraid of Ghosts
There was once a man of southern Xia Shou by the name of Juan Zhu who was both slow-witted and cowardly.
Walking along a road one moonlit night, he saw his own shadow on the ground in front of him.
"It's a ghost crouching there!" he thought to himself.
Looking up, he saw a strand of hair dangling in front of his eyes.
"Ooh! It's standing up now!" he thought.
He was so frightened he turned around and began to shuffle backwards.
As soon as he reached his home, he dropped to the ground, dead.
Xun Zi